The Fed and your money

What the central bank’s announcement means for interest rates, markets—and you.

The Federal Reserve’s efforts to slow inflation have escalated with its announcement this week of a half-percentage-point increase in the federal funds rate and plans for what it calls "ongoing increases in the target range" to potentially 2.75% by the end of 2022, and as high as 3.3% by mid-2023.

Meanwhile, the Fed is unwinding its “quantitative easing” (QE) program under which it has bought trillions of dollars' worth of government and mortgage-backed bonds since 2008, adding liquidity to markets and boosting stock prices in the process. Starting in June, the Fed will shed $95 billion in Treasury securities and mortgage-backed bonds from its balance sheet each month. That's far more than what it did in its last attempt to wind down QE in 2017.

The Fed’s recent moves reflect an increasing sense of urgency about trying to slow inflation, which is a threat to the financial wellbeing of investors and consumers alike. As Fed Chairman Jerome Powell explained, "Inflation is much too high, and we understand the hardship it is causing. We are moving expeditiously to bring it back down. We have both the tools we need and resolve to restore price stability on behalf of American families and businesses."

But while higher rates may eventually help tame inflation, stock market volatility is likely to continue to increase. And as the Fed raises rates, it also raises the chance of inadvertently tipping the economy into recession.

Why the Fed is raising rates

The Fed’s move is part of a larger goal of “normalizing” interest rates closer to where they have historically been during periods of strong economic growth such as the one the US finds itself in now.

Since March 2020, rates have been kept near zero even as the economy has recovered strongly from a brief but deep recession caused by government-ordered shutdowns of economic activity in many states to combat the pandemic. This unusual situation and other factors, including pent-up consumer demand and disrupted global supply chains, have helped push inflation to its highest level in 40 years.

Near-zero rates have also boosted stock prices. That has benefited working Americans who own stocks in their retirement accounts, but it has penalized the large and growing number of people who are already retired and rely on bonds, CDs, and other fixed income securities for their incomes.

Now the Fed’s leaders want to wean the economy and markets from super-low rates and QE, which have pushed the prices of many stocks higher.

Why the Fed is tightening now

The Fed’s mission is to help maximize employment and ensure stable prices of goods and services. It does so primarily by moving the federal funds rate up and down to control the supply and cost of money circulating in the economy.

The Fed’s leaders are concerned that prices are rising too rapidly, and they hope that raising borrowing costs will slow spending and reduce inflation. They say they expect inflation to drop below 3% by the end of 2022. But they have also expressed concern that with current inflation around 8.5%, companies might raise prices and wages, which could prolong higher inflation.

The Fed's May 4 statement is a departure from its original plan to gradually raise rates in small steps en route to a high of only around 2%. But the past several months have landed a series of blows on that earlier plan worthy of a heavyweight champion, which have forced the Fed to rethink how it'll fight back.

First, in March, the war in Ukraine and subsequent economic sanctions on Russia caused the Fed to cut the size of its first rate hike since 2018 in half.

Then, the consumer price index landed a roundhouse right on the Fed’s slow-and-low rate hike plan with its highest reading since the 1980s and many experts expressed doubt that the Fed’s planned rate hikes would have much impact.

Now, the news that the economy actually shrank in the first quarter raises the prospect of a return to 1970s-style stagflation when the left hook of low growth alternated with the right cross of high inflation to rope-a-dope helpless Fed policymakers for more than a decade.

Lisa Emsbo-Mattingly, head of allocation research, says that unlike the inflation and geopolitical risks that have prompted the Fed to change course before, the first quarter GDP data is likely to have little effect on the Fed’s course going forward. “It was mostly driven by exports, which may actually be a good sign for the health of the global economy. It’s also a trailing indicator, which means it tells them what has happened but doesn’t give insights into what will happen.”

What may happen next 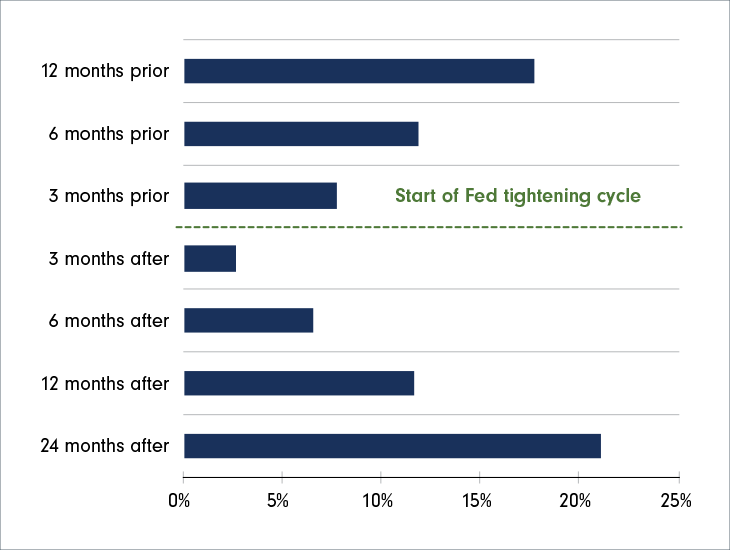 In the short term, Emsbo-Mattingly says, higher rates won’t trigger a recession in the US. "I think the US economy is in OK shape," she says. But she says she doesn’t think the path back to normal monetary policy will be smooth: "Everyone is dependent on that super low rate, and as the Fed starts to raise rates, it is going to be rough. We've seen it start to hurt equity markets. You will hear things go bump in the night."

The last time the Fed raised rates in 2018, it did so without triggering a recession, but its job was easier then because inflation was low. Even then, the stock market still reacted negatively to the rate hikes. Keeping this history in mind, the current surge in stock market volatility may be a preview of what’s to come. While supporting financial markets is not part of the Fed’s mission, the central bank and the markets do a complex dance between the markets’ expectations of the Fed policies and what the Fed actually does. Sometimes the dance is like an Italian tarantella with light, quick steps, and lots of flirting between the two partners, like when the Fed raised rates many times from 2004 to 2007 and the market didn't miss a step. Other times, the dance is more like punk-rock slam dancing. In 2015, for example, the Fed raised interest rates for the first time since the financial crisis and there was an immediate backlash from the market.

Potential or actual stock volatility shouldn’t excessively worry long-term investors, though, as higher rates are apt to eventually slow growth and inflation and markets should adjust to the new interest rate regime.

However, Emsbo-Mattingly and others caution that there are always unknowns lurking where politics meets policy. The Fed has historically been relatively free of pressure from politicians to advance their agendas and has usually been able to do what its leaders believe is most likely to fulfill its mission. However, as the central bank finds itself confronting a uniquely challenging combination of high inflation, slow growth and geopolitical tensions, could a distracted Fed make an error or fail to push back on political pressure? In a mid-term election year with control of Congress up for grabs, politically driven policy risk is not inconceivable.

The most clear beneficiaries of higher rates may be those who invest in bonds primarily for income. Typically, when interest rates rise, newly issued bonds may pay higher yields while prices of bonds that are currently in the market decline. So far this year, prices of those existing bonds have fallen as investors have anticipated the impact of higher rates and sold many of their bonds.

Over time, higher rates and a resulting rise in stock market volatility may increase the appeal of bonds as both sources of income and preservers of capital in portfolios. The steep rise in stock prices since 2020 reflected the belief of many investors that low interest rates offered them few alternatives to stocks. With rates and yields on bonds rising, though, some investors may turn toward bonds and away from stocks. Although higher rates can hurt prices of bonds already in the market, bond investors can manage that risk by focusing on bonds that have lower duration, or sensitivity to changes in interest rates.

As rates rise, stocks are unlikely to produce the strong returns they’ve delivered since the 2020 rate cut. Historically, stocks have delivered lower returns immediately after the start of a period of rate increases, but returns have increased over the longer term. Certain sectors have also historically fared better than others when rates rise. Banks and other financial firms, for example, tend to benefit from high interest rates, as they can make more money on loans. As rates rise, fundamentals such as earnings and valuation may become increasingly important and earnings growth is forecast to remain strong through the time period during which the Fed will be raising rates. 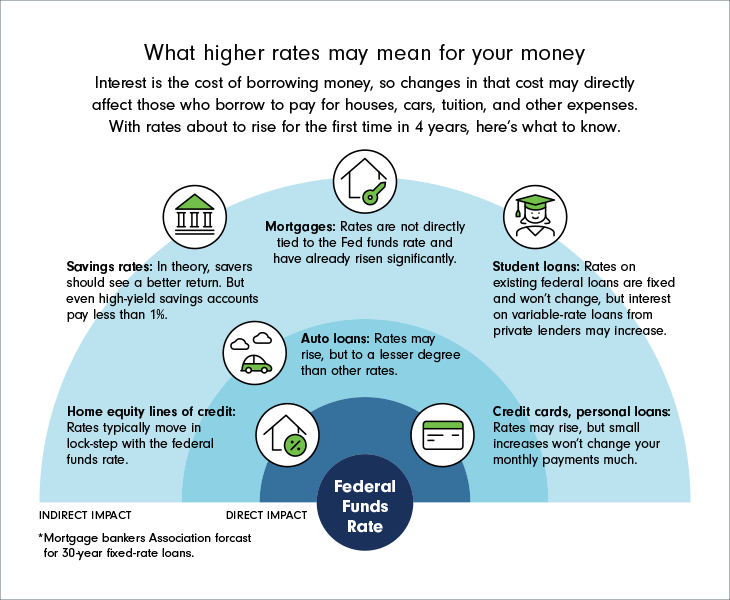 History shows that rate increases may be accompanied by stock market volatility and even sizable pullbacks, as in 2018 when higher rates were followed by a brief 20% correction in the S&P 500®. But while wars, sanctions, and inflation may all add to market anxiety, a gradual rise in interest rates is no reason for long-term investors to abandon well-diversified financial plans. Instead, they should maintain perspective on news events and the short term, and focus instead on their longer-term goals. As global macro strategist Jurrien Timmer points out, "It doesn't mean you should sell. The market, over time, tends to go up, and over the last 2 years, it has gone up a lot. Even if the market were to go sideways for a year after being up 100% in 2 years, I would still count that as a good outcome."

This information is intended to be educational and is not tailored to the investment needs of any specific investor.

Stock markets are volatile and can fluctuate significantly in response to company, industry, political, regulatory, market, or economic developments. Investing in stock involves risks, including the loss of principal.

The S&P 500 Index is a market capitalization-weighted index of 500 common stocks chosen for market size, liquidity, and industry group representation to represent US equity performance.

In general, the bond market is volatile, and fixed income securities carry interest rate risk. (As interest rates rise, bond prices usually fall, and vice versa. This effect is usually more pronounced for longer-term securities.) Fixed income securities also carry inflation risk, liquidity risk, call risk, and credit and default risks for both issuers and counterparties. Unlike individual bonds, most bond funds do not have a maturity date, so holding them until maturity to avoid losses caused by price volatility is not possible. Any fixed income security sold or redeemed prior to maturity may be subject to loss.

Views expressed are as of the date indicated, based on the information available at that time, and may change based on market or other conditions. Unless otherwise noted, the opinions provided are those of the speaker or author and not necessarily those of Fidelity Investments or its affiliates. Fidelity does not assume any duty to update any of the information.

Past performance is no guarantee of future results.

Diversification and asset allocation do not ensure a profit or guarantee against loss.

Keep in mind that investing involves risk. The value of your investment will fluctuate over time, and you may gain or lose money.

This is original content from Fidelity Investments in the U.S.

Inflation & Rising Rates - what this means for investors